I don't really need an audio notification about this, it's an inert operation anyway but it is a behavior that is ingrained since many text editors have a feature where you press home and it goes to the first non whitespace character and press home again and it goes to the beginning of a line. Thus I've got a pattern going where I press Home-Home to go to the beginning of a line. In editors supporting the aforementioned behavior it works and in simple editors such as notepad it works - in Stickies it works as well as far as cursor positioning goes, but I get the annoying sound every time my muscle memory kicks in. I could really do without the sounds and my coworkers could really do without the incessant beeping all day long. I would be happy if Stickies never made any sound whatsoever, don't really need that in my text editors anyway.

Stickies uses the RichEdit50W1 windows innate control . It has a "AllowBeeps" style setting but this does not mute the "Home" beep.
You can change the sound wav  or set it do "none" in windows sound settings for the default beep or  just mute systemsounds ( i have set it to a very low level ). 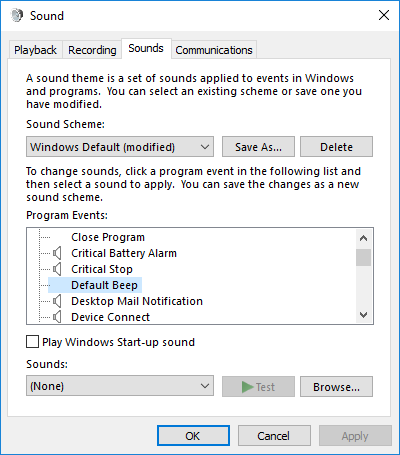 Thanks for the reply, that makes sense, at least there is a work around.

So they put in an AllowBeeps setting only to not honor it, nice. I can't for the life of me envision why anyone would need a sound notification for moving around in a text editor, seems utterly useless and is most annoying. "OH NOOO YOU PRESSED HOME WHILE ALREADY AT BEGINNING OF LINE, PANIC PANIC, PLAY ALERT, USER MUST BE WARNED OF THIS DANGEROUS SITUATION....", ugh. It makes me want to attach a system sound to every time they breathe out or something just to return the favor.

I don't really like the idea of disabling the default sound across the board for all apps but it seems like that is the only recourse, really wish Windows would let you configure this on an app by app basis (some apps that play sound show up in the mixer and can therefore be muted, but this one does not). The bad part is there probably are some useful uses of the default beep which now I won't get, but still I guess that is better than the alternative.