....so im using a windings character instead of an icon to highly imported rows in a note .... your idea and a good one

...but i find that it often changes the style and colour of following normal text lines ...... so i have to go into the style menu and change it

question - is there a quicker way?  ... or a way to stop it happening in the first place? 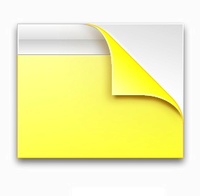 This is precisely why I describe the checkbox support in Stickies as a "hack", as it can have the same effect.

What I do when the user presses alt-c is to insert the checkbox character, then a space, then select the first of those two characters, and then change the font, before switching the selection back to after the space.

That way the one character gets set as you like, but the space after it is the original font.  When text is added after a character, it inherits the same font as that character, which is why your next line ends up Wingdings.  You can do as I describe above to avoid that.